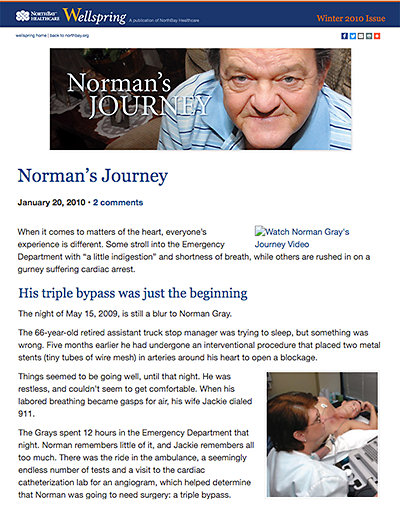 When it comes to matters of the heart, everyone’s experience is different. Some stroll into the Emergency Department with “a little indigestion” and shortness of breath, while others are rushed in on a gurney suffering cardiac arrest.

In some cases, a simple stress test can start the journey, which could lead to an interventional procedure or open heart bypass surgery. Response and treatments are as diverse as the patients themselves.

And while no two patients are exactly alike, each case is similar in several ways. To help potential patients, their families and friends understand the ins and outs of cardiac care, Wellspring was invited to tag along with Fairfield residents Norman Gray and his wife, Jackie. As you read how his heart started to heal after a triple-bypass, beating heart surgery in May 2009, you will be introduced to the teams that comprise the heart of NorthBay’s Heart & Vascular Center.

His triple bypass surgery was just the beginning

The 66-year-old retired assistant truck stop manager was trying to sleep, but something was wrong. Five months earlier he had undergone an interventional procedure that placed two metal stents (tiny tubes of wire mesh) in arteries around his heart to open a blockage.

Things seemed to be going well, until that night. He was restless, and couldn’t seem to get comfortable. When his labored breathing became gasps for air, his wife Jackie dialed 911.

The Grays spent 12 hours in the Emergency Department that night. Norman remembers little of it, and Jackie remembers all too much. There was the ride in the ambulance, a seemingly endless number of tests and a visit to the cardiac catheterization lab for an angiogram, which helped determine that Norman was going to need surgery: a triple bypass.

Norman had had a heart attack.

Surgery became necessary. After waiting several days in intensive care for the blood thinners he had been given in the Emergency Department to wear off, things moved quickly.

Remembers Jackie, “People started coming out of the walls. The whole program starting clicking right then.”

“His heart was working at about 50 percent of capacity,” recalls Dr. Deeik. “That means his heart muscle was thirsty for more blood flow and oxygen. The beating heart surgery allows us to operate on the heart while it’s beating. We don’t need to stop it, or arrest the heart. By doing so, the heart will tolerate the operation better. There is less risk for bleeding and blood transfusions, kidney failure or lung problems.” It meant the best chance for a quick recovery and fewer complications for Norman.

The Grays were given NorthBay’s “Cardiac Surgery: Patient & Family Handbook,” which Jackie calls her ultimate guide to navigating the journey. Jackie says on Monday she started to recognize people from the book. Several pictured in it came by to introduce themselves and to patiently answer all the questions the Grays and their family had.

Norman remembers going from Room 21 to the elevator on the day of surgery.

They put an IV in, and “the rest is history,” he chuckles.

“History” actually involved a four-hour surgery, and six days in ICU before being discharged.

Veins had been harvested by a scope from Norman’s legs, leaving inch-and-a-half-long incisions, which healed quickly.

The recovery team at NorthBay included physical and cardiac rehabilitation therapists and a nutritionist, all devoted to making sure the Grays would be comfortable and confident to continue the healing process at home.

Norman learned how to safely get in and out of bed, using a pillow to brace against his healing breast bone. He was given post-surgical exercises to help him build his strength. And a nutritionist helped him determine the right combination of medicines and diet to stabilize his blood sugar and blood pressure.

“I was involved in Norman’s journey from the beginning. I followed his pathway from hospitalization through discharge, maintaining contact with patient, family and staff and coordinating his discharge care.” Norman was finally released with supervision from NorthBay Health at Home.

This is a program that allows a patient to recover at home, but under the watchful care of a medical team. It was decided that a Telehealth monitor could be installed in the Grays’ bright-green mobile home in Fairfield. Each day, Norman had to answer questions on the computer screen. It helped him track his vitals. “Blood pressure, blood sugar, weight, everything,” says Jackie, noting it was a huge relief.

“All that information went directly to the nurses and doctors. They were in constant contact,” she says. “That eases the caregiver’s mind a lot.”

Of course, once Norman was on the mend, the monitor was removed.

He began a rigorous schedule of checking in with his primary doctors, including his endo-crinologist, and his cardiologist.

A July visit with his endocrinologist Dr. Deborah Murray left the Grays overjoyed. Despite a shaky start maintaining his blood sugar, Norman managed to get his average glucose (or hemo-globia A1c) levels down.

“This is perfect,” an enthusiastic Dr. Murray told the couple. “This is almost non-diabetic.

It means that you’ve made such a change in your blood sugars that you’re almost normal. This is remarkable.”

Norman was diagnosed with type 2 diabetes in 1998. Maintaining his blood sugar had always been a struggle, Jackie recalled.

The heart attack was a wake-up call that couldn’t be ignored.

“Heart disease is the thing that kills diabetics,” explains Dr. Murray. “Eye disease, kidney disease, vascular disease and amputations are all things that people think about that are complications of diabetes which we try to avoid. Those are terrible, but what kills the diabetic is cardiovascular disease.”

The Grays then met as a team with Norman’s cardiologist, Dr. Milind Dhond, who was pleased with his progress. He took note of his medications, checking on the cardiac rehab schedule and scheduling a followup echocardiogram to stay on top of Norman’s progress.

“While a patient might meet once with their surgeon before, and once after a procedure, they’ll usually never see the surgeon again,” explained Dr. Dhond. “But the relationship with their cardiologist becomes a lifelong thing for the patient. It is the modification of risk factors, leading a healthy life, keeping weight issues under control, and doing all those things.

If all goes well, we’ll be seeing each other for many years to come.”

In cardiac rehabilitation three days a week at NorthBay Medical Center for a 12-week stint, Norman attacks the bikes and the treadmill with gusto.

His every action is closely tracked. He wears a monitor that reports his blood pressure, pulse and other key stats to nurses who run the facility.

It’s a mini-gym of sorts, with exercise equipment squeezed into a main room ringed by offices. “They work you good,” Norman confides between exercises.

The women who oversee the operation have all been intensive care nurses with cardiac experience.

“I know I can go to work and he can go to rehab, and he’ll be in good hands,” says Jackie.

Debbie Gordon, clinical manager of NorthBay Cardiac and Pulmonary Rehabilitation, confirmed that Norman was right on track, learning to manage his routine, his blood sugars, his diet and exercise.

He walks nearly every night with Jackie, and works out every day at a local gym. He has lost 20 pounds since his surgery and established a whole new diet and exercise routine. He has also gained a healthy new outlook on life.

The journey, say the Grays, would not have been possible without a dedicated team at NorthBay Medical Center that has continued to check in with the couple over the past several months.

During a recent hospital visit, Norman took his “NorthBay” bright red, heart-shaped pillow and asked “his heart team” to autograph it. It sits on a special shelf in his living room, a reminder of how many people literally and figuratively touched his heart.